A Season To Remember 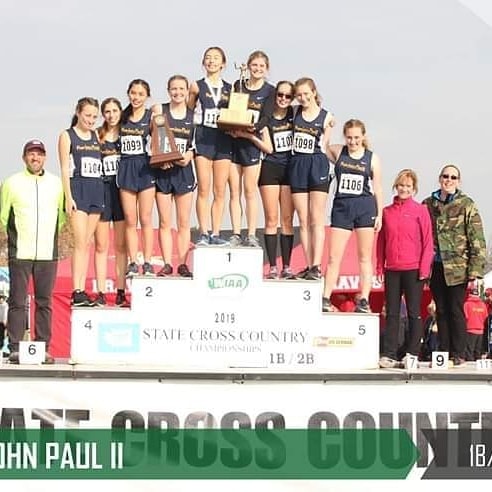 The 2019 JPII girl’s cross-country team was the ultimate underdog, with just one season under their belt as a team, forming the year before in 2018.

It is hard to pick a favorite team you coach because of the many student-athletes you meet along the way.

This team is up there in my book, including teams I managed over the years outside of running as an executive in the workplace.

I have never seen anything like what happened to this team in my lifetime.

It is still hard to believe what this team did in such a short period with several girls who had never run at all or had never run cross-country.

The story's outcome is better than any underdog movie I’ve seen. They did in real life what is made up many times on the big screen.

This team had some great struggles and hurdles to overcome; I still shake my head and asked myself how they did it.

After processing it for three years, grace amid struggle is the only answer I can come up with.

Like the grace God gives us even during our life struggles, this team's storyline was full of grace amid the season's struggles.

Grace Amid struggle was the centerpiece of the incredible 2019 JPII Girl’s Cross-Country team. It was a season that I will never forget.

Here is their story.

The JPII girls are likely the first team in state history to win a state championship in cross-country in their second year with a team. This State records don't list every team's initial start date, so it is currently impossible to verify this accomplishment for sure.

The state record cross-country historian, Rod Wilcox, had this to say in his summary of the 2019 Girls' team: “…Pope John Paul 2 not only returned (to the state cross-country championships in our second year with a team) but ran away with the title. This is probably a record, but not even I track years of existence compared to titles”.

The JPII girl's team was also the smallest school to ever win the state title in their division since its inception in 2006.

The Beginnings Of A Team

Some of the varsity girls on the JPII team had never run before joining the cross-country team or had never run cross-country before. It was amazing to witness the team's incredible transformation in such a short time frame. The team’s hard work, determination, overcoming multiple obstacles, and faith was beautiful to watch over the following months. To see each team member's self-confidence grow each week was a fantastic blessing. All the girls on the team are very different, with unique abilities on and off the sports field.

Like any other great team, the JPII girls had their share of ups in downs in their state championship season. They had many high points and experienced low points where they persevered and had to pick themselves up again. Like one parent said, "you don't have to be perfect to win a championship." However, you need to keep working hard and smart, learn from your mistakes and have faith that everything will work out.

One Captains Perspective Of The 2019 Season

One prominent example of the heart of the 2019 girls' team and how the JPII girl's team overcame adversity is stated very well by Vivi Kondrat, a sophomore in the 2019 state championship race. Vivi said:

"...School Cross-Country wasn't about running for glory. It was about running for something greater than ourselves or even our team. We prayed before competitions and challenging workouts, after our races, celebrated, and when anything unexpected happened.

For example, in 2019, our second year competing as a team, my dad drove half our cross-country team up to Marysville for a meet. We laughed and sang when one girl turned around and screamed: we heard a crunch and felt a jarring impact. Luckily, we all made it out of the four-car accident intact. Still, I clearly remember huddling by the side of the road for an hour, praying both to calm down and because we were concerned about the other people in the accident. I had never felt more connected to my faith.

Ultimately, JPII has prepared me for life by teaching me a fundamental truth: Life has hills. Sometimes you have to struggle, and you might feel tempted to quit. After that car accident, none of us wanted to race… and it showed! We lost to the reigning champions by almost 100 points. But Coach Weber had a common message for each person, a singular focus and mission, and it wasn't necessarily beating everyone. It was reaching our God-given potential.

In our first year as a team, he challenged us to reach State...then the following year, he set an almost unbelievable goal: winning the State Championship in our second year as a team. Before the 2019 state cross-country meet, we drove to Pasco to check out the course and prepare mentally. As we jogged, it seemed like nothing but hills!

We had been preparing for this race for months, but it wouldn’t be handed to us. On the day of the race, during the last stretch, I couldn’t keep up with a few runners who passed me at the end. I was disappointed in myself… it seemed like I had failed our team. But I had given it my all, and so had everyone else. And because it was a TEAM effort, because everyone was committed to meeting their potential, our small team (in only its second year of competition!) won the State Championship!

We wouldn't have considered it possible if Coach had never pushed us beyond our barriers”.

THROUGHOUT THE SEASON, the JPII girls picked themselves up when they faced challenges by praying together and honestly talking through their different situations. Grace, amid struggle, was the centerpiece of this team in their championship journey. The girls never gave up. I had never seen anything like these girls did in the state championships during my coaching career.

The story of the actual state championship race was like something out of a movie script, but it was real life.

The girls were in third place at mile one in the 5k race.

They had gone out conservative and wanted to run the first part of the race smart and within their capabilities. They had moved to second place behind the three-time defending state champions by mile two.

With 1000 meters to go, every girl on the varsity seven pushed the pace like never before. They all ran their hearts out in the last 1000 meters of the race.

It was amazing to watch such a young team carry out their race plan in the most pressure-packed race of the year.

We knew the race was close to the finish line. The defending state champs knew it was close as well. They had beaten our girl’s team by 99 points earlier in the season at a large cross-country invitational.  Even if we didn't win, I knew our girls had run their hearts out. They had nothing left as a team at the finish line. You could not ask for anything more.

When it was announced that we had won, our team had tears of happiness and joy. The three-time state champs were a great class act as well. They were outstanding in their graciousness and sportsmanship after the announcement was made.

The team celebration ensued at our team dinner that night. It was a time to give thanks and celebrate the many blessings of a great season. We thanked God for an amazing day and season.

Lessons That Last A Lifetime

The life lessons of the 2019 season were priceless.

"Never let others define what is possible in your life."

"Just because it's never been done before does not mean it can't be done now."

"It's never over until you cross the finish line."

And with strong faith and a committed team, anything is possible.

Grace and mid-course corrections are always a part of the journey, no matter what you do or where you are in life.

The lady Eagles had a great season, but more importantly, they learned many life lessons along their journey. Their strong faith in God greatly impacted their daily work and choices.

The Eagles also supported other teams through sportsmanship like no team I have ever coached. They did their best to be role models as student-athletes, as demonstrated by winning an outstanding team academic award in 2019 with a team GPA of 3.681.

The lady Eagles were a joy to coach throughout the 2019 season.

I will never forget this group of extraordinary young ladies. I have rarely seen such amazing hearts and perseverance amid any life storm.

Congrats on being the first team in school history to win a state championship!

In this 20-second video, our parents caught the surprise moment on video when we won the state title.

Some of the articles about the 2019 JPII Girls Team are below.

From The WIAA (the oversight organization for sports in the State of Washington), After Winning The High School Team Of The Month Award

"The Pope John Paul II girls cross country team captured a come-from-behind, photo-finish, 1B/2B State Championship in only its second year with an entire team. Their hard work, determination, faith, and willingness to grow have helped push the Eagles through the struggles on and off the courses. Grace amid struggle was the centerpiece of this team's Championship journey. As voted by league coaches, the girls also won the Sea-Tac League Sportsmanship Award and finished with an outstanding team GPA of 3.681.