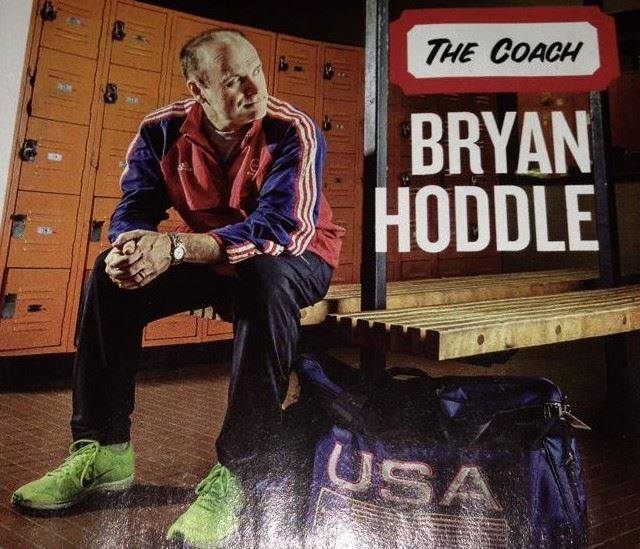 Bryan was featured in Runner's World Magazine in this picture as one of their "person's of the year."

Many people have written about him in the past. His story is widely circulated in the running and military communities. The combination of his work with non-disabled athletes and disabled athletes is unparalleled in the United States.

Few have done what this man has done to cross over and help both populations in a world-class manner. His life is like a majestic stone that shines brightly on a summer day. Hope fills the air when this man walks into the room for good reason. He helps others come alive.

This story about coach Bryan Hoddle is a bit different than most. I am coming at this story from someone who grew up with Bryan. We have known each other since our junior high school days.

The two of us spent almost every day together during those long summer days and cold winter nights so long ago, working out together and chasing our dreams as young men on and off the track. Bryan ended up being the best man at my wedding. And my best friend.

I know Bryan’s story well. I saw first-hand how he overcame  adversity at a young age to become one of the greatest coaches in the world, especially for our disabled veterans and Paralympians. This is not to say what Bryan did for non-disabled runners was not excellent; it was.

This man also had over 300 kids on his middle school track team when he started his coaching career as a young man! Who does that? The magazine Runner’s World selected him as one of their heroes of the year for a reason.

Bryan was also a pioneer in so many ways during his career. Like most pioneers, he had those who wanted him to succeed and those who tried to protect their status quo way of doing things.

Making positive, life-giving change is the work of courageous men and women willing to pay the price and stand alone. You are guaranteed to have some critics along your journey when you want to make a better life for those you serve. From a young age, Bryan could push through the status quo and do the right things regardless of the critics who stood in his way.

Let’s back up a bit and look at Bryan’s life during his teenage years. Bryan was among the hardest-working people I’ve ever met, even in Junior High and High School. He flipped burgers at a local restaurant for many years, ran track and cross-country, got his schoolwork done, played basketball, and found time to work hard at everything he attempted. He had an incredible work ethic.

Nearly every hard practice we had in junior high, and high school track and field was a race. Bryan was state champion in the 440 (400 meters now), and I was state champion in the 880 (800 meters now). Iron sharpening iron was a daily event in our lives when we were young. We pushed each other daily to be the best we could be with the gifts we were given. Pushing each other to be better carried over to our adult years in our joint ventures together.

Looking back, we pushed each other to be the best we could be in more important things as young men, including breaking some long-standing societal barriers in the disabled sports movement.

I remember going to Oklahoma City, Oklahoma, and other locations with Bryan to watch future Paralympians run with their prosthetists. Bryan would watch Paralympic athletes run in their prostheses and suggest improving their prosthetics so disabled athletes and others could run faster. I would throw my two cents in, but Bryan was the primary observer. I was more on the marketing and business side of our work together.

There were few road maps for Paralympic athletes back when we worked together. Bryan’s astute biomechanical eye would forever help change the face of the lives of disabled athletes.

New technology came out of the sessions he attended that would forever change the capabilities of disabled athletes and others who wanted to stay physically active after going through physical trauma. Bryan was willing to look hard and fast at changes needed to make the world better for Paralympic athletes.

Bryan was the sprint coach pioneer in the Paralympic Movement. The results spoke for themselves and included gold medals and world records for those he coached. Bryan was selected as the USA Paralympic Track and Field Coach in Athens, Greece. He helped bring many medals back to America.

I also remember countless hours talking with Bryan about breaking down the many barriers that stood in the way of Paralympic athletes and the Paralympic Movement. That is a story for another day. We had no roadmap and relied on each other to make things better in our unique roles. It was a fantastic time of life for us as young men trying to make things better for the people we served.

You can also read many stories on the internet and elsewhere about how Bryan started helping wounded warriors during his coaching career. His work in this area is well-documented. Bryan wanted to help the wounded warrior’s community in all areas of their lives, not just the physical aspects.

Bryan's work at Walter Reed Hospital and other military hospitals is well known. His compassion and heart for helping wounded veterans are one of the ages. He has done much for our disabled veteran community to help them improve their physical, mental, and spiritual conditions. His love for veterans is unquestionable and steadfast.

Today Bryan is enjoying retirement in the great State of Arizona. Our discussions these days focus more on Bryans’ and Sherri’s beautiful granddaughter, who they both adore, his wife Sherri, who was also his high school sweetheart, his family in general, Church life, and of course, all those great professional sports teams in Arizona, especially the Diamondbacks. Bryan and his wife Sherri love baseball and go to many games each year.

Even though we live in different states now, we still contact each other several times each week. Bryan still occasionally volunteers to help runners, wounded warriors, and others.

There is something very settling about having a long-time friend from your childhood. Bryan and I went through good times together and challenging times when trying to break longstanding barriers, and we have those memories of growing up that we can and do share. Having a lifetime friend is a gift from God.

You young coaches out there, never give up on your dreams, push ahead with all you have, serve others along the way, and find someone you know who will challenge you, make you a better person, and help you become your very best.

Iron sharpening iron, yes, it’s been a wonderful and meaningful friendship, my friend. Thanks for pushing me to go after my God-given potential like many other people you've touched along your journey.

You can read more about Bryan's story on his website at https://www.bryanhoddle.com/. 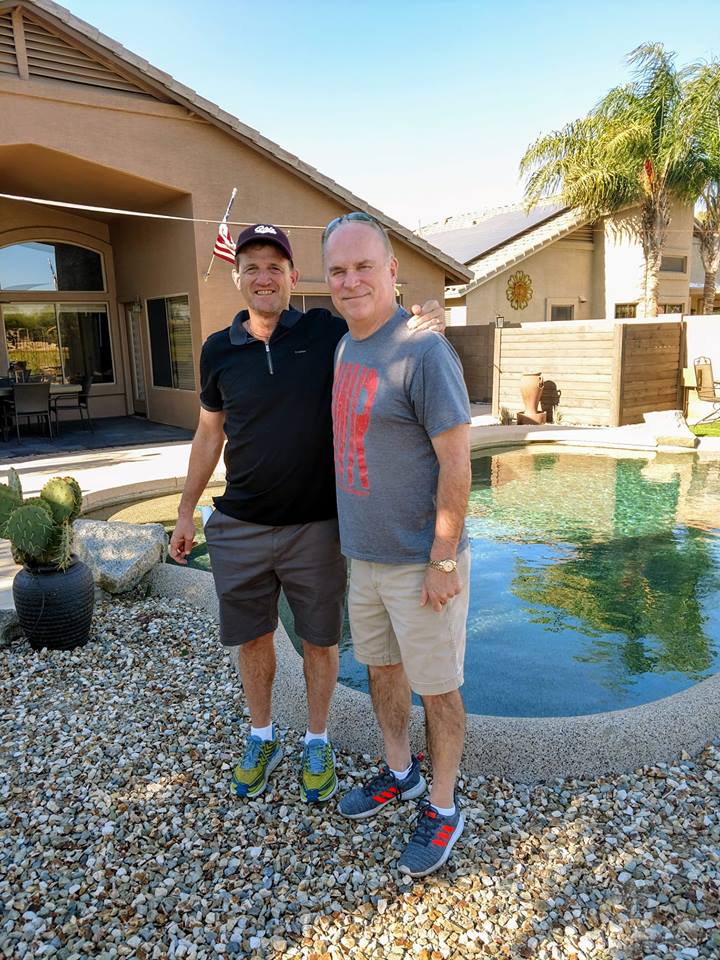 Two old friends meeting up in Arizona. We have known each other since the 7thgrade. 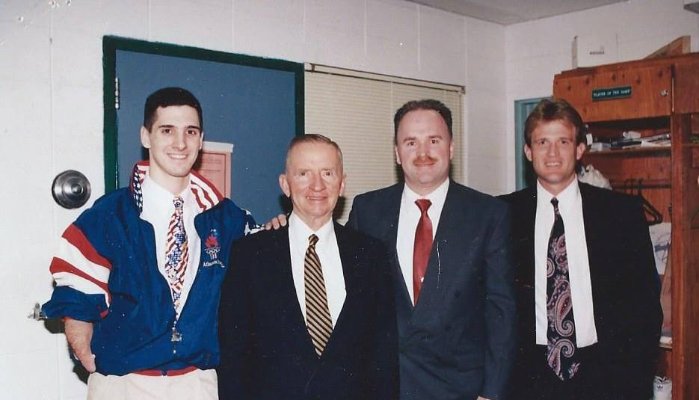 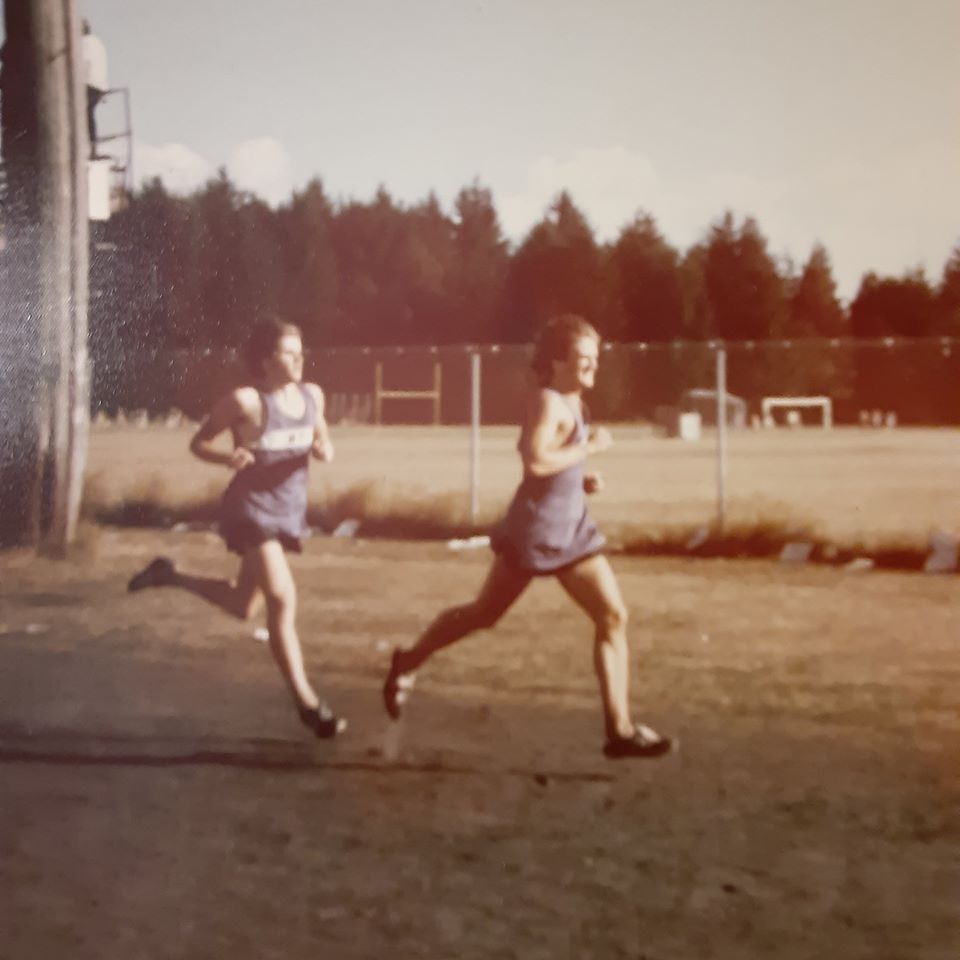 Larry and Bryan going 1-2 at a race in our youth.